As a creator, it’s so easy to get tunnel vision — focusing on the vast distance between the current version and the perfect state in your head. Never mind that “perfect” is a constantly shifting and impossible target. Recently, though, a comment on that orange news site [1] in response to “How did you overcome perfectionism?” helped begin shifting my mindset. The idea boils down to:

Only YOU can see the perfect vision in your imagination and where the current version falls short. From an outside perspective, all they see is you going from 0 → thing. If it’s useful, then great! No one cares what it might have been besides you. 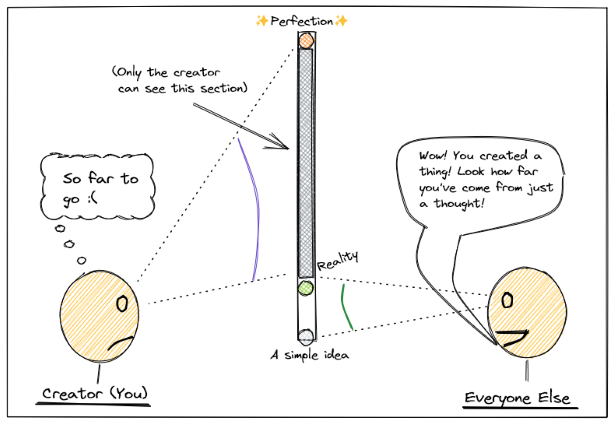 It felt like the sun peeking through the clouds 🌤️. Duh, of course no one can see what’s in your head! As long as what you’ve created is at a milestone, it’s finished in other people’s eyes. Anything past that is a bonus. AS the creator, though, you see it as missing your expected pieces and falling short of its potential. One idea won’t change a lifetime of perfectionism inertia on its own, but trying to see imagined ideas for a project as bonuses, rather than necessary elements, is a first step. Best of luck for those on similar journeys, and get shipping 🚢.

A useful thing to remember is that you are the ONLY person that knows how beautiful the thing you were planning to build was going to be. What you’ve actually built is always going to be disappointing compared to the potential thing you had imagined.

No-one else has that context though. From someone else’s perspective, you built a thing! If that thing is interesting or solves their problem, they couldn’t care less what it would have been if it had matched your imagination of its full potential.

Most people never build or ship anything at all, so shipping itself is a big cause for celebration.